Högdalen depot is the heart of the new metro

The new metro is not only new routes and stations. Nothing would work without room to maintain the trains. That is why the metro depot in Högdalen is being expanded – the heart of the new metro circulation. 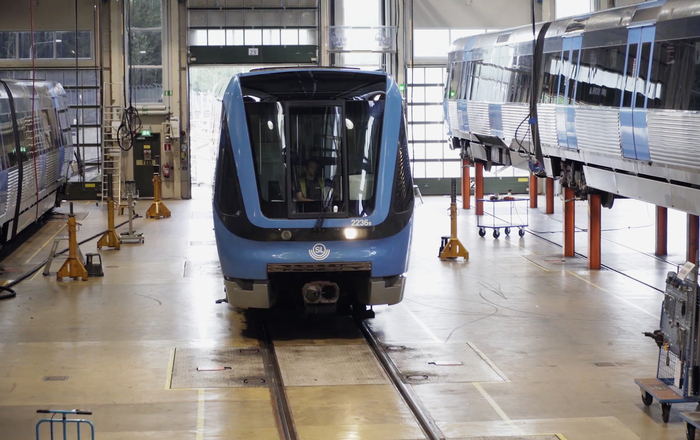 The expansion of the metro is in full swing around the Stockholm area. In Högdalen some of the most important work is under way to make the new metro a reality – here Högdalen depot is being expanded to accommodate the new trains inserted on the routes.

– More trains will need to be cleaned, maintained and parked. The depots are incredibly important and if they are not around, the tracks and stations would be empty, as the trains would not be running. The depots are simply the heart pumping around the traffic in the metro network, says Henrik Unosson, project manager for the expansion of the Högdalen depot.

Started as a technician

One of Henrik Unosson’s very first jobs was actually as a technician i Högdalen depot during the early 1990s. Since 2018 he has worked for Region Stockholm for the expansion of the same depot.

– It feels cool to be back where I once started, but now with the focus of innovating and expanding.

The depot situated in Högdalen industrial area was designed by architects Erik Vestergren and Cyril Marcus, and was built in 1957 and 1958. Since then the depot has been expanded and extended on several occasions, and now it is time to do that again.

– Since the construction of the depot it has never been depleted of people. The metro never stops and it needs constant maintenance and cleaning.

Henrik Unosson explains that just as cars a metro train needs service after a certain amount of kilometres. Some checks have to take place more frequently, while others are performed at slightly longer intervals. And then there are checks that continuously need fixing, when it is required. For example wheels and brakes underneath the vehicle are checked, and in the passenger area ventilation and interior design is checked in order to ensure a nice environment for the passengers. 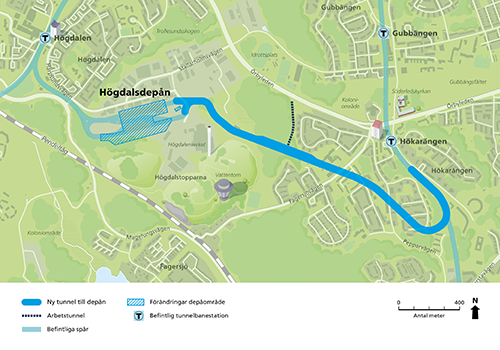 Map of the expansion at Högdalen depot. Click on the image to enlarge.

This is how the expansion is done

In the depot area, several new buildings will be erected and other buildings will be remodelled. For example, new storage halls will be built, a new cleaning and graffiti removal hall and the existing workshop will be remodelled to fit the new, longer C30 trains. That will be about a doubling of the capacity when the depot can receive around 50 trains, compared to the current 25 trains.

A new tunnel will be built from the Högdalen depot to Hökarängen, thereby enabling the depot to receive trains from both the Blue and Green line (the Hagsätra branch will belong to the Blue line). Adjacent to the tunnel a new storage hall will also be built underground, with space for 11 trains.

During the spring of 2021 new work will commence at Kvicksundsvägen in Högdalen industrial area. At Örbyleden the construction of the work tunnel to be used during the whole construction phase has begun, to remove rubble and bring in machines and personnel to work on the tunnel with tracks and the storage hall. This autumn preparatory work will also commence next to the Green line metro tracks in Hökarängen.

Operation and expansion at the same time

– It is a challenge that the expansion work will take place while the existing depot will remain fully operational. This means that the construction period will be a little longer than it would have been otherwise. And since most of the maintenance work on the metro trains take place at night, most of the construction work will happen during the day, says Henrik Unosson.

All the work with the expanded depot in Högdalen is estimated to take around 5 years, and people living, working and being nearby will notice the work through e.g., traffic diversions, transports and sounds from drilling and blast work. When the new storage hall and the tunnel with tracks are ready, they will not be evident above ground.

When the new metro is complete, it will be possible to have more traffic on both the Hagsätra and Farsta lines, and passengers in all of Stockholm will be able to take the metro to e.g. Nacka, Arenastaden and Barkarby.

– The expanded depot also means that the entire metro system will be more durable and stable. If something happens in the depot in Rissne, then trains from the Högdalen depot can easily be deployed to servicing the Blue line, concludes Henrik Unosson.

Region Stockholm’s metro expansion administration investigated 15 possible depot solution and has since discussed Högdalen and Skarpnäck as two possible locations. In February 2019 it was decided to expand the existing depot in Högdalen. One of the advantages of expanding the Högdalen depot is that it will become a depot serving both the Blue and Green line.