Turning a cavern into a new metro begins with concrete

The last tunnels for the Blue Line to Barkarby are currently being blasted. Parallel to this, bare caverns are being converted into the new metro. One word covers the first step: concrete. 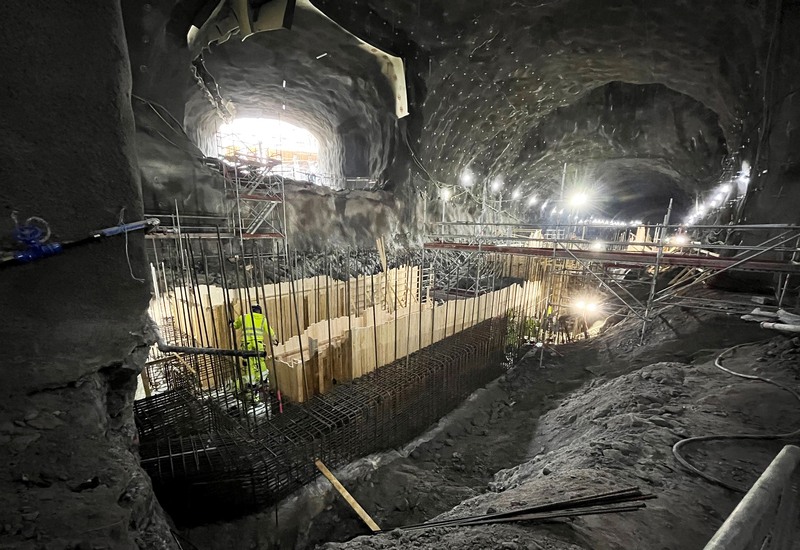 About 250 unique concrete structures will be built along the four-kilometre stretch from Akalla to Barkarby. These include tunnel walls, utility buildings, pump pits, station buildings, escalator shafts, ticket halls and ventilation towers above ground.

“The production principle is the same for all structures,” says Christer Vestergren, construction manager for concrete and steel structures.

The wooden formwork is built, the rebar is put in place and the concrete is poured. After three or four days, the concrete has hardened and the formwork can be removed.

“We don’t pour concrete where doors, gates or pipes are to be installed. In such places we create cavities, voids inside the formwork.”

The rough concrete surfaces might not look that great, but they will rarely be visible in the finished metro. However, concrete provides the foundations for the escalators, ticket halls and platforms to be built later on.

While the last tunnels are being blasted for the Blue Line to Barkarby, some 40 concrete works are also under way. The next phase will then begin: kitting out the stations and tunnels with, for example, power, tracks, escalators, lifts, floors and other surfaces.

“But we won’t be finished before then. There will be some overlap in the work. That’s how the metro extension has been planned,” says Christer.

Getting all the pieces of the puzzle in place requires effective coordination, planning and logistics, which is a challenge when working in a tunnel under the ground.   “In a tunnel, you always have a roof overhead. When building above ground, there’s usually a tall crane on hand to help move the heavy rebar. Getting the construction materials in place takes a lot longer in the tunnels.”